A Florida police station in the middle of the night. Two parents searching for answers. AMERICAN SON is a gripping tale about who we are as a nation, and how we deal with family relationships, love, loss, and identity. "Christopher Demos-Brown has written a play that dives deep into the big questions of who we are as a nation, by exploring the intimate relationships within a family caught at the crossroads of love, loss, identity and community," says star Kerry Washington. "After reading the script I was immediately enthralled by the world of the play and the gripping circumstances that these characters are facing. I am excited to step into the ring with Kenny & Steve to tell this story on Broadway."

American Son was awarded the 2016 Laurents / Hatcher Award for Best New Play by an Emerging Playwright. 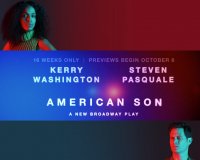 TOWNHALL VIRTUAL MEETING: THE IMPACT OF COVID 19 AND SYSTEMATIC INEQUALITY IN COMMUNITIES OF COLOR
Dear Friends & Supporters Please join us ...

FREDERICK DOUGLASS, “IF THERE IS NO STRUGGLE, THERE IS NO PROGRESS”
The general sentiment of mankind is that a man who will...