COME OUT AND EXPERIENCE HARLEM DAY!

The stage is set! Once again, Clean Money Music will be performing live on Harlem Day!

Added to this roster is:

This is a Clean Money Music  show you don't want to miss!

Stage in front of the YMCA Building 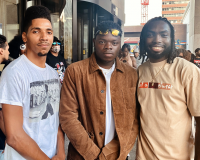 You've Got That Flavor: You are Salt and Light!
Job 6:6 KJVS Can that which is unsavoury...

UPDATE- NO NEED TO PANIC - YOU CAN SAFEGUARD YOURSELF AND YOUR FAMILIES - AND BEAT THIS THING!
From Dr. Joseph Mercola ...