The Theatre Committee at the National Arts Club Presents

In Partnership with Harlem Shakespeare Festival

World Premiere of Award-winning actress Debra Ann Byrd's BECOMING OTHELLO: A Black Girl's Journey directed by Medal of Honor winner Tina Packer/Shakespeare & Company. Produced by Voza Rivers/New Heritage Theatre Group and recorded live from The Center at West PArk. This multimedia theatrical production bursting with soulful songs, lyrical language and dynamic movement is the poignant and powerful story of Debra Ann's trials and triumphs with race and the classics, along with her gender-flipped journey on the road to becoming Shakespeare's noble general Othello.

Register for this FREE event here:

*This production of BECOMING OTHELLO is made possible with the support of a Virtual Performance Residency at The Center at West Park. 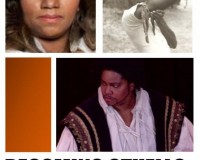 Nicki Minaj butt drop is no joke - what once looked amazing can turn out bad for you in a number of ways....
Young ladies please beware. You have decades of fun ahead of...

Harlem is..HEALING is expanding honorees and adding digital programs
Response has been extremely strong to a new digital campaign by Community Works and...