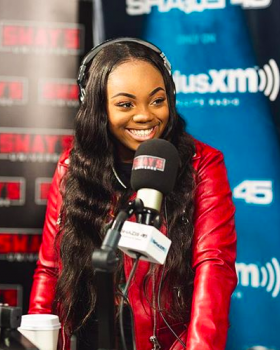 What if you found out that your next favorite rapper could be a 16-year-old Trini girl from out of Brooklyn, NY named Young Devyn? What if you’d found that she has already been hailed as one of the most versatile artists with lyrics that can massacre any contender, male or female, in a cipher? But who is Young Devyn?

Born Devyn Ashli Millicent Tyson (birthday Dec. 28, 2001), Devyn was raised in the typical Trinidadian household. “Young Devyn was born humming to her own heartbeat,” shares her mother and manager, Natasha Mason. “I know people say they started singing in church, but my little Devyn started humming her own tunes before she could even talk.” At the age of 2, Devyn became very sick and almost died; but even through the ordeal, the doctors and nurses couldn’t stop talking about the little girl in ICU who hummed songs all day and night. She made an impression on the medical staff and the little songs she sang helped the doctors to understand what she was feeling since she was so young. A survivor, Devyn made it through the medical scare and by pre-k was serenading the class. By the age of 5 she was asked to sing the school song at her “Step up Ceremony,” adding her ‘Lean On Me’ style twist to the school anthem leaving everyone amazed!

Exposed to all facets of music including ole time calypso songs like “Gene & Dina,” “Suga Bum Bum” which her grandmother sings and gospel music as she spent many Sundays at her aunt and uncle’s church. Like most young people it was mostly hip-hop on her playlist: Lauryn Hill, Nicki Minaj, and Meek Mill are the artists who inspire her the most, musically and lyrically.

Over time, Devyn’s musical talents evolved and expanded from singing traditional Soca/Caribbean music to rapping. The singer and emcee started dabbling in hip-hop in 2016 posting 15sec Instagram videos gaining a new fan base. People were excited and wanted to hear more, so she started working on her mixtape posting “Freestyle Friday” videos on her Instagram page to rave reviews attracting industry names like Sway, Jermaine Dupri, DJ Afrojack, Fred The Godson, DJ Magic, DJ Waffles, Budda Tha Future, and DJ Kurupt. Her freestyles went viral on FB, within 3 days the posts had 1 million views and by the end of the week was at 3 million. She dropped lyrical heat on RevCarib, barely even breathing as she ripped bars through Nicki Minaj’s “ChunLi” and “Barbie Tingz.”