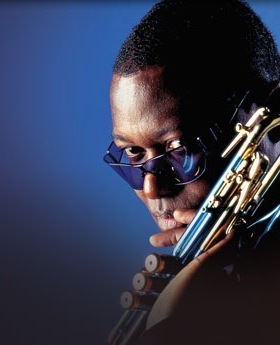 Wallace was mentored by Miles Davis after Miles heard him in 1983 at his birthday gala performance in Carnegie Hall. Their association peaked when Miles chose Wallace to share the stage at his historic performance in Montreux in 1991. After Davis died, Herbie Hancock, Ron Carter, Wayne Shorter, Tony Williams and Roney banded together and toured the world in tribute.

Roney recorded his debut album as a leader, Verses, on Muse Records in 1987. A number of albums on Muse, Warner Bros. Records and Concord Records/Stretch Records followed.

By the time Wallace Roney turned 40 (in 2000) had been documented on over 250 audio recordings.

1210 views March 28, 2016 - 02:56
1 0
Wallace Roney with Miles Davis Tribute Band
Wallace Roney with Miles Davis' Second Great Quintet (Wayne Shorter on sax, Herbie Hancock on piano, Ron Carter on bass, and Tony Williams on drums) play "Walkin'" as part of a Miles Davis tribute, on an ABC special "A Celebration of America's Music", broadcast in December of 1996. This was about 2 months before Tony Williams' unexpected death.