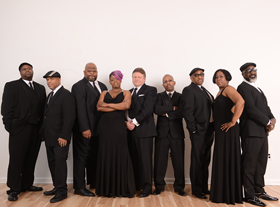 The URBAN GUERILLA ORCHESTRA is simply untouchable. Consummate professionals with decades of experience; World class musicians that record and tour with major label artists. Undoubtedly they are one of the best bands performing throughout the United States today.

Directed by trumpeter Henri McMillian, The URBAN GUERILLA ORCHESTRA is comprised of instrumentalists and vocalists who have worked with artist such as Michael Jackson, Quincy Jones, Aretha Franklin, Boyz II Men, Alicia Keys, Gladys Knight & the Pips, Kool & the Gang, The Roots and countless others.

UGO will customize the band to accommodate your event with configurations ranging from ten pieces and up (with the option to add auxiliary horns, vocalists and dancers). The URBAN GUERILLA ORCHESTRA exemplifies versatility, sophistication and are energy packed.

The URBAN GUERILLA ORCHESTRA delivers
an energy packed cutting edge musical experience that will rock you every second of the performance!!!

UGO Motion Picture Sampler
This is a 15-minutes short sample of the full length Feature Film Produced by Jersey Style Films Inc Entitled " Urban Guerilla Orchestra." This is Philadelphia's Number one Band and this feature film takes a look at their performance. This Concert Was filmed at the Kurtz Center in Philadelphia on March 18th. The full-length version of this film will be released later on this fall, please be on the look out for the premiere in Philadelphia.