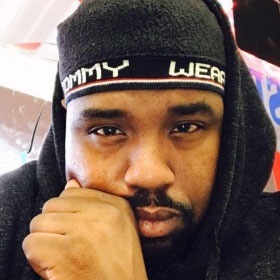 NOFLESH has been influenced by hip hop culture since he was a teenager and has unashamedly been one of its long time proponents. Having an undying commitment to lyricism, NOFLESH was influenced by hip hop legends such as Rakim, KRS-1, Kool G Rap, Wutang Clan, and the Notorious B.I.G. Viewing hip hop as a medium with which to enlighten minds, inspire the soul, and articulate the language of the faith to the masses, it is his intention to reclaim the heart of hip hop culture at its root.

NOFLESH engages his listeners passionately, intellectually, and theologically. He currently holds a bachelor’s degree in Biblical Studies from BHU in Atlanta GA, studied theology for two years at the ITC in Atlanta GA, and he holds a MTS from LU in Lynchburg VA. Currently serving as pastor of his local church, he is indeed in touch with the cries of humanity. Whether facilitating marriage and family seminars, mentoring at-risk-youth, teaching biblical principles to young college students transitioning into functional adults, he finds his joy in life serving his fellow man.

Transparent Reflection is an in-depth musical journey into the struggles of the mind and heart of the personal ministry of Noflesh. Having served in ministry for over 25 years there are a multiplicity of emotions that one faces as you will hear in songs like “How We Do It” and “Me & My Ministry.” Facing daily temptations and personal vices is always a challenge especially in the life of a minister as you will hear in songs like “Rize” and “Shout Out.” All in all Transparent Reflections is a musical chronicle and testimony of the life of Noflesh. In the track “My Life,” the history of the life of Noflesh from teenager to present is chronicled and presented over a jazzy track complete with saxophone riffs and soulful bass fills. This album even includes an anthem saluting the battle rappers of the old school who though many of them never recorded an album much less charted, were instrumental in paving the way for other rappers to gain notoriety.