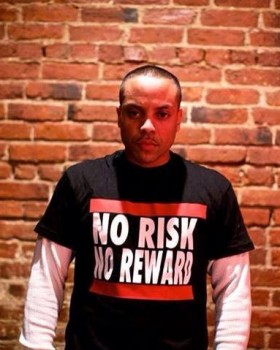 Once in a millennium afrobeat/hip-hop artist, Napoleon Da Legend. Legend transferred his skills on the basketball court (where he got his name) to the wax. But wait: before that, he had to teach himself english. He listened to hip-hop like a mad scientist.

Great. Now that we know where the drive and passion comes from…

Paris-born, to the Comoros Islands, then Washington DC raised, Napoleon is a Brooklyn-based artist who uses his voice as weapon of hope, social-critique, conquest, and joy. N.D.L.’s song “Black Privilege” led him to be featured at the Essence Festival in 2017. He was then invited to perform live on FOX 5’s Good Day DC.

Following the release of his “Steal This Mixtape” series in 2016, Napoleon has been touring the US and Europe. He’s been featured on Statik Selekta’s Show Off Radio Show, Tony Touch's Toca Tuesdays, DJ Eclipse’s Rap is Outta Control, and Sway Calloway’s Sway in the Morning. To top all this, he stole the show at the Rocksteady Crew’s 40th Anniversary show at SummerStage in Central Park. N.D.L. held his own with Mobb Deep and DJ Premier, living up to the “Legend” in his name.

2017 was a year of charity for N.D.L., headlining a show at Reebok Union Square in conjunction with Xavier Mission, and The Anti-Defamation League’s “Voices” concert, with Paul Schaffer and The Plain White T’s. Napoleon even found time to connect to his French roots, performing at the Bastille Day Festival in Manhattan.

From hip-hop that makes you think and feel triumphant, to infectious, memorable dance records, Napoleon continues to prove he’s a force to be reckoned with. And he’s only just begun.