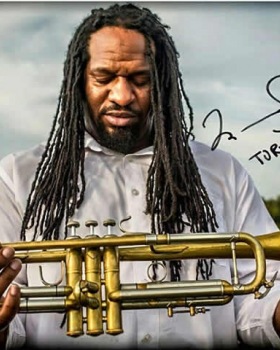 Maurice S. Turner, II is co-founder of Turner World Around Productions, Inc. and one-half of the group M.U.G.A.B.E.E. (Men Under Guidance Acting Before Early Extinction), an artistic ensemble composing and performing a blend of jazz, hip-hop, spoken word poetry, and soul music on a totally conscience tip.

When not performing with M.U.G.A.B.E.E., Maurice is a trumpeter for hire.  He has shared the stage with many great musicians, which include The Wynton Marsalis Septet, Ellis Marsalis, Cassandra Wilson, Mulgrew Miller, Jon Faddis, Danny Barker, Wallace Roney, Stranger Malone, Donald Byrd, Keeter Betts, Elise Witt, Jimmy Heath, Ray Drummond, Chris “Daddy” Dave, Randy Brecker, and Bobby Rush to name a few. He has credits on over a dozen CDs of various genres and has most recently composed music for the critically acclaimed spoken word theater collective Universes’ “Eye Witness Blues”, in which he also performs alongside Stephen Sapp and Mildred Ruiz. He also served as Musical Director for Uprooted: The Katrina Project, a piece focusing on the displaced citizens of New Orleans and the various struggles that were faced during the catastrophe.

Mr. Turner recently served as the Jackson, Mississippi community organizer of The Mississippi Color Line Project, a national initiative of Junebug Productions, founded and directed by John O’Neal of New Orleans.  The Color Line Project engages artists, educators, and organizers in the collection and archiving of stories from people involved in The Civil Rights Movement. Mr. Turner is an Arts Educator in the Jackson Public School System where he has worked with the “My Mississippi Eye” Program at Lanier High School in Jackson, Mississippi.  He uses performing art to help students empower themselves personally, work to define their school’s culture as one of inclusion, understand the importance of organization and community structure, and become more involved in their community’s political process.  As part of this program, he and his students explore the social, economic, and political implications of The Great Migration from Mississippi to Chicago, 1917-1970.

In addition, he is currently Chair of the Board of the Highlander Research and Education Center, and in 2007 he was Director of the State of the Nation Art & Performance Fest, Jackson, Mississippi. Mr. Turner studied Microbiology at Howard University and Musical Performance at Alcorn State University and the University of Mississippi ; has been a member of Alternate ROOTS since 2001; and is an artist on the Mississippi Arts Commission roster.