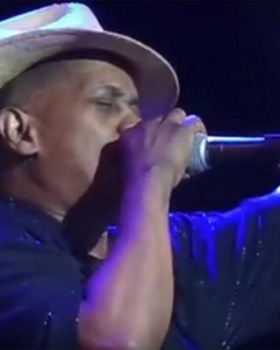 Vocalist, guitarist, and harmonica player, Keith ‘The CAPTAIN’ Gamble's heart and soul is rooted in the BLUES.

The CAPTAIN is a consummate performer whose talents are both exceptional and diverse! He can charge his performances with Funk, Rock, Gospel, Jazz, R&B, and Soul, but will always lead his audience back home to the Blues. The CAPTAIN's artistic development followed the same direction of so many Blues Greats.

From a very young age, The CAPTAIN took to the electric guitar and harmonica naturally. Summers spent in New Orleans and Mississippi allowed The CAPTAIN to be introduced to Gospel, the Blues and to the harmonica.

In order to hone his guitar skills, The CAPTAIN, as a teenager, began sitting in on jazz and blues gigs throughout Harlem.

The CAPTAIN and his current band, The Nu Gypsies, appear regularly in Greenwich Village & Harlem.

The CAPTAIN currently serves as “Jazz Ambassador” for the US State Dept., spreading the message of the Blues & American popular music throughout the world.

He has performed in Greece, Germany, Holland, Belgium, France & six African nations and was assigned to perform at the W.E.B. DuBois Center in Accra, Ghana in a special concert celebration on Jan. 20, 2009 honoring Pres. Barack Obama.

The CAPTAIN was also the lead singer/guitarist of the first house band to appear on the iconic TV talk show “THE VIEW” with Whoopi Goldgerg in their Halloweeen Time Warp broadcast special, Oct. 2010.

The CAPTAIN is currently performing various New York area and national venues. And, is a Music Correspondent / writer for The Harlem Times.