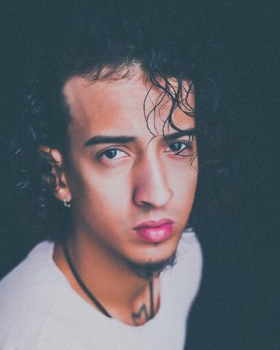 Joshua Orlando Viera – better known by the stage name LVNDY – is a Bronx-raised musician who is on a mission to live up to the legend of his grandfather, salsa king Landy Nova.

Growing up around music his whole life, and frequently joining his grandfather for gigs at venues all over the world, LVNDY quickly developed his own unique sound and style and began writing lyrics at a young age. Today he’s one of the rare artists who can fuse multiple sounds into something truly original. His originality eventually got him discovered by a group in Italy called Size Matters with more than 2.5 million streams on their songs. The group found his covers on YouTube and really liked his voice and wanted to work with him. They went gold in France, and when one of the producers – N-Chased – broke off from the group, he sent LVNDY a beat and they decided to work together on a single, “Met Me First.” It’s a pop song with a touch of R&B that poses the question to a lady: “What would have happened if you had met me first?”

“It’s about growing up and always being in a dilemma of always being the good guy,” LVNDY said. “In the song I meet a girl and she’s dating a guy who she’s been dating since middle school and he’s a real douche bag, but she settles for it. So when I ask her, ‘What if you met me first?’ I’m asking if it would be different for her, and whether she’d be in the situation that she’s in, and if maybe we’d be in a relationship instead.”

LVNDY said the song has a definitive “Justin Bieber” vibe to it, though midway through the song takes on a more aggressive sound with a more guttural vocal. The lyrics, he said, were inspired by a number of experiences he’s had throughout his life, most notably those that rose and fell during his time in the military. Looking back on those years, he said it feels like he was always in-and-out of some kind of heartbreak because many of the women in his life were “not able to do the distance” that comes with being in a relationship with someone in the military.

His music always has a note of hope to it, however, and he doesn’t want fans to the get the idea that he only sings sappy sad songs. In fact, he hopes he becomes known as a musician who makes feel-good music with good vibes. And more than anything he wants his music to leave a lasting impact.

LVNDY is already working on his next single, “Bad News,” which he hopes to release in November or December of this year. It’s a song that he said will showcase the full range of his sound, and will set the stage for a larger project that he hopes to drop in 2019, called “Greyland.” It’s a project that he said will be kind of “Justin Bieber gone boogie – though with a harder edge, especially lyrically.” He’s working on the project with another artist named Grey North, and a producer named Ca$h Dracula.