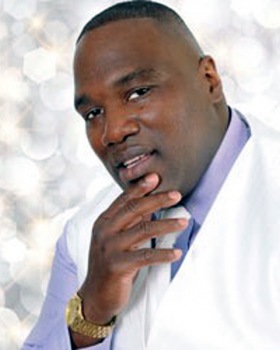 Harvey Morris is the President and CEO of Tuff Stuff Productions. A talented, Emmy award-winning music producer, songwriter, vocal arranger, professional drummer and actor, Harvey’s extensive and diversified experience has contributed to his reputation as a consummate professional in the entertainment industry.

Harvey was born in Bronx, New York. His parents recognized his joy for music at an early age, and at the age of 2, Harvey’s parents purchased his first drum set to keep him from beating on their pots and pans. By the age of 4, Harvey and his cousins were dancing and singing to the sounds of Motown and Stax Records. It was clear to Harvey’s family that he was destined to become an entertainer. Growing up in a household with God-fearing grandparents, Harvey grew up in and attended the St. Luke A.M.E. Church in Harlem, New York. At 8 years of age, he began singing in the Children’s Choir under the caring directorship of Yvonne Clark. When he was just 12 years old, Harvey recorded his first commercial for American Airlines under the tutelage of music director Leon Tubman, also of St. Luke’s A.M.E. Church. The years to follow have proven to be constant progressions and refinements of his talent.

In 1999, Harvey founded Tuff Stuff Productions. Mr. Morris’ tagline “Welcome to Tuff Stuff Productions, Where You Can Be the Star You Are,” embodies his company’s commitment to success and excellence, while supporting his vision to empower people through entertainment and business. Harvey’s objective is to discover new and unique talent and help artists to become well-rounded entertainment and business professionals. He also desires to encourage these professionals to become vanguards of the entertainment industry.

Harvey has had the privilege of working with and being shaped by some of the most influential entertainers and producers of his time. He has collected a patchwork, quilt-like scrapbook where the pages continue to be filled with tour dates, photographs, recordings, wonderful opportunities and memories. Mr. Morris has shared the stage with various artists and groups including, Cameo, The Main Ingredient featuring Cuba Gooding, Freddie Jackson, Bobby Humphrey, Stevie Wonder, Taylor Dane, Allison Williams, J-Records talent Gavin DeGraw and George Faison, the acclaimed producer of the Broadway play The Wiz, to name just a few.

Mr. Morris has done voiceover work on the Nickelodeon network and produced music for Ashley Stewart, a clothing company for women. In 2009, Harvey also produced music for the PBS special entitled, “Voices in Conflict,” which earned him an Emmy Award.