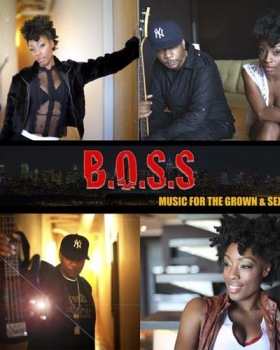 Smooth & tasty music for the grown and sexy!

B.O.S.S is an acronym for the phrase “Big On Sexy Sh!t” in which the group’s co-founder, producer/musician, filmmaker Abdul Malik Abbott aka DJ Abby AB coined from his adoration of smooth & sexy soul music. He joined forces with singer/songwriter Natalieq aka Natalie Ridley and formed B.O.S.S, which is a music project that incorporates and celebrates the sounds of R&B, Jazz, Soul, Reggae, Pop & electronica. Their first single is entitled “Come Again”, a tune that truly defines their multifaceted sound and their song “Me & You” has been licensed for the soundtrack in the Warner Bros./Joel Silver Produced movie, “The Loft”.

Raised in Harlem, NY Abdul studied at the acclaimed High School of Music & Art and graduated with a film degree at NY’s School of Visual Arts, then worked his way up in the world of film & TV, first working as a sound technician on Spike Lee’s “Do the Right Thing” and “Mo’ Better Blues”. His love of music only grew larger being part of the MTV generation, which introduced him to a variety of musical styles. With hip-hop & soul as his “life’s soundtrack”, Abdul also embraced the music coming from overseas. His love for Euro-Soul and Euro-pop heavily influenced his musical style to date.  Abdul eventually became an editor and music video director directing several hit videos including the award winning video for the jazz legend Abbey Lincoln, “People in me”. In the mid 90’s he met Damon Dash who was the manager for a rap trio called Original Flavor, a connection which led him to work with the then up and coming rapper named Jay-Z. Abdul directed several of Jay-Z's music videos including the #1 charted videos, “Ain’t No…” and “Dead Presidents”, as well as the must-have home video, "Streets is Watching". The long-form music video project shot Jay-Z to super stardom and was #1 on Billboard’s home video charts. It also prepared him for his "adventure" as director on the hip-hop infused gangster feature film "State Property" (Lionsgate FIlms). Since the beginning of his film career, Abdul has worked with 100's of artists, but never lost his love for creating music of his own. Forming B.O.S.S allowed him to fulfill his musical destiny as musician, songwriter and producer.

Natalieq aka Natalie R. Ridley was born into the arts industry in Brooklyn. Touching all corners of the arts as early as 9. She went to Performing Arts H.S in NYC and is NYU alumni. The Lion King was one of the international show's she performed in, abroad, and on Broadway's stage. She performed several different roles showcasing her voice, acting, and dance talent. Natalieq performed in live performances and videos with artist Beyonce, Joss Stone, and Tweet. Natalieq has been blessed to flex her talent in TV shows, short films and Movies.

Recently B.O.S.S has released independently their first EP under the Blue Music Productions company entitled   "Tricky Kinda Love", which also includes the up-tempo tune "Major Love", the heartfelt, "Bad Timing" and the smooth and jazzy ballad, "When You Love Me". The talented Guitarist, Mike P. performed guitar licks on 4 of the B.O.S.S tunes.

Still an independent group, B.O.S.S has produced 4 music videos in-house with Abdul Malik Abbott directing and producing the videos. As the music project grows with each tune produced, B.O.S.S promises to continue making rhythmic, smooth and melodious music for the grown and sexy!