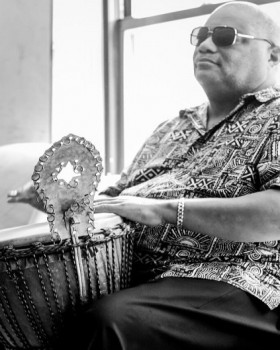 For almost a quarter century, Baba Donn Eaton Babatunde, a percussionist very much in demand, has performed with many Major American Dance Companies in the world’s greatest performing-arts venues.

His recording career is as equally varied as it vast; the jazz idiom, rhythm and blues, and most African derived percussion styles are represented in his discography. He is a featured member of the esteemed last poets. He has long been acknowledged as one of New York City’s master teachers of African Drumming and the rhythms of the Diaspora in the Americas. Baba Donn Eaton Babatunde is presently on faculty at the Harlem school Of the Arts for over 25 years, teaching all ages from 4 years of age to adults.

Baba Donn Eaton Babatunde has theatrical credits with The Classical Theatre of Harlem’s Macbeth, Caligula, and Dream on Monkey Mountain as percussionist for each Production and with HBO’s Hoop Life sound track. Baba Donn Babatunde has performed with Maurice Hines’s "UPTown It’s Hot," as a Featured Percussionist. Baba Donn Babatunde has performed with the Metropolitan Orchestra at the Opera House, Carnegie Hall, The State Theater , Avery Fisher’s Hall , City Center, The Apollo Theatre and The House Of Blues and is also features on Sesame Street segment called drumming School and Julie Andrew’s Green Room on HBO to name a a few.

Baba Donn Babatunde has received proclamations from the City of New Orleans, The City of New York Public Advocate’s Office as well a plaque of recognition from the Mid Manhattan branch of the NAACP for his contribution to the Arts.