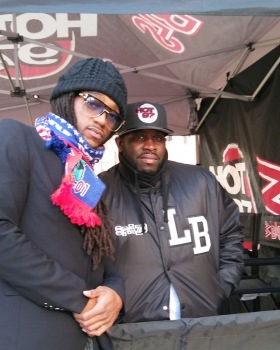 Krish Tosh is HOT !!!!  Krish is an acclaimed Reggae, Hip Hop Artist and Jazz artist, whose career is on the move with electrifying groove / speed. Equally spell binding his passion and success for, as he continues to be the architect of his own music.

Krish Tosh Designs his music, builds it and wants his audience not only to enjoy it but also feel the emotion. His passion is fueled by his legacy of raw talent which incorporates production, song writing, and arrangement that are done with melodic emphasis and a conscientious approach. He believes that in changing your life through music we can change the world. The commute to success is just a train ride away as he zig-zags across the united states delivering the music and message that speaks to our minds as well as addresses the times.

Formal leader singer of the Reggae Hip Hop Group Afrikan Kartel, Tosh is now pursuing a solo career, working diligently of his first Solo Single Release entitled “World Is A Jungle.” Tosh is well known in the New York, Atlanta, Northeast Region and has performed on various stages and platforms some including The NYC Marathon, Harlem Week, NYC Go Africa Festival, National Action Network, & NYPD National Night Out, and Atlanta Sweet Auburn Festival which is the biggest outdoor festival in the entire Southeast Region. Health and wellbeing is one of the artist main focus because Tosh is also a veteran Certified Medical Professional Hemo Dialysis Technician, who utilizes his influence in the community to health and wellness alongside his music. Whether it be physical, spiritual, phycological, or mental, Krish is all about advocating for a balanced lifestyle.

HOST OF OTHER PERFORMANCES

Krish is an activist from being involved with several social justice issues such as Stopping the violence, stopping police brutality, protecting the rights of children from abuse, protecting and supporting the rights of fathers to have custody or share custody of their children, preventing homelessness and women against domestic violence. Krish Tosh is also supportive of the community through being involved in several food drives, coat drives, and other charity based events.